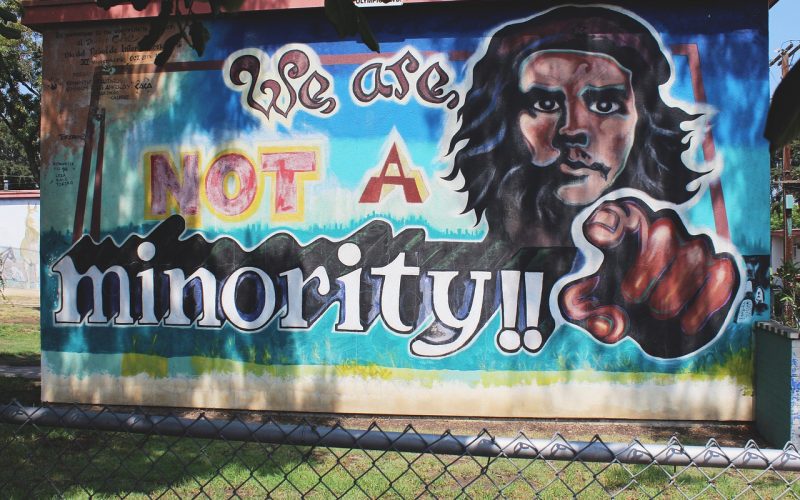 The following is the first of a three-part series.

The project on which this essay is based focused on art museums within the English-speaking world and their evolving relationship with the art of African Americans and Native peoples.

As a direct result of colonialism, the English-speaking world long held that their dominant white culture was superior to that of other races and ethnicities. Therefore, minority art has not had equal representation in white art museums. This article considers the history of minority representation in museums as the foundation for understanding the current relationship between minorities and museums.

Today’s society is at a critical juncture, in which trends towards tolerance, respect, and multiculturalism, compete with deep cultural divisions and growing hostilities towards immigrants and the perceived “other.” Minority artists, whose works have often been viewed as primitive, unschooled, or inferior, are now actively seeking equity and recognition for their own cultural history and esthetic values. However, recent attempts at inclusion have been uneven and ineffective.

Museums have the power to affect social change through exhibitions and programs that validate the heritage, values, and aesthetics of other cultures. This article, therefore, weighs the challenges that museums face in terms of exhibitions, educational programming, staffing, and charges of cultural appropriation, as a more inclusive cultural paradigm unfolds. It is hoped that these arguments, choices, and proposed potential solutions may begin a dialogue regarding a more inclusive representation of diverse artists in the future.

Art is one of the most basic forms of human expression, even preceding the development of the written word. The origins of European art are often traced back to the ancient Greeks and Romans, early Christian art, and the Renaissance. For centuries, European traditions set the aesthetic standards for the mainstream art world. The history of colonialism was such that the values of indigenous cultures were devalued, and the values of the European culture were exalted.

History offers numerous examples of cultural genocide perpetrated by whites. African Americans were beaten, killed, or sold as slaves. They were separated from their family groups and the ethnic heritage that defined their culture. Native American culture was also targeted by whites.

In the 1890s, Captain Richard H. Pratt famously advocated cultural genocide in the guise of “charity.” His speech, “Kill the Indian, and Save the Man,” reprinted in Americanizing the American Indians: Writings by the “Friends of the Indian” 1880–1900 encouraged white “superiors” to civilize “savages” by eradicating their inferior Native culture and language. Both races lost their rights to self-determination and both had their ethnic heritages systematically destroyed. Today, most whites ignore or downplay that reprehensible history.

However, the echoes of that time continue to plague minorities as they seek to reassert and revalidate their own ethnicity and cultural values. Until recently, their artwork was considered “primitive,” “unschooled,” and unworthy of inclusion in art history. Universities across the English-speaking world taught art history from the perspective of the dominant white culture.

Museums relied on ethnocentric education as the foundation for their artistic decisions. Minority cultures in English-speaking countries are underrepresented in art museums today because, due to the colonial legacy of subjugation and domination, these cultures are rarely included in art history and art education.

The literature referred to here helps contextualize the issues of colonialism, the rights of minority cultures, and the ethics related to museum practice and disenfranchised peoples. Additional news opinion articles, on recent and timely museum responses to accusations of cultural appropriation, may also be consulted to help contextualize contemporary ethical issues.

Several scholars have reviewed the history of African Americans’ relationships with mainstream museums. Bridget R. Cooks’ comprehensive textbook, Exhibiting Blackness: African Americans and the American Art Museum , has used a chronology of 20th century African American art exhibitions, beginning with the flowering of art during the 1920s in the Harlem Renaissance, to evaluate the difficulties Black artists faced in gaining acceptance.

The 1920s was, paradoxically, a time in American history when African Americans were barred from entering many museums. The pivotal chapter in Cooks’ chronology was the 1969 exhibition at the Met, Harlem on My Mind, which was decried as an insulting exhibit that presented Harlem and the black community as “curiosities” for the “superior” white norm.

Susan E. Cahan, dean of the Tyler School of Art Temple University, linked mainstream museums’ representation of Black art to injustice outside museums in her book, Mounting Frustration: The Art Museum in the Age of Black Power. She examined the personalities and pervasive ideology that made inclusivity so difficult to achieve.

Caroline V. Wallace, professor of museum studies at Melbourne University evaluated the successes and failures of three important years of activism in “Exhibiting authenticity: The black emergency cultural coalition’s protests of the Whitney Museum of American Art, 1968-71”,. She credited the Black Emergency Cultural Coalition’s protests of exhibitions at Whitney Museum of American Art in New York as a turning point for including Black art and culture. All three authors found the progress in black inclusion to be cyclical in nature coming and going in waves.

Native American artists also struggled for fair representation in museums in the 20th century. Kathleen Ash-Milby, curator of Native American arts at the Smithsonian, and Ruth B. Phillips, a professor of art history at Carleton University, Ottawa, collaborated to review twenty-five years of their struggle. Their article, “Inclusivity or Sovereignty? Native American Arts in the Gallery and Museum since 1992” evaluated the inclusion of indigenous artists in Canada, New Zealand, Australia, India, and the United States. In all five nations, they observed greater mainstream awareness of historically disenfranchised Native artists. Questions remain about whether Native artists should aim for inclusivity or institutional separation.

In another article Dr. John Paul Rangel of the Institute of American Indian Arts in Santa Fe recommended changes to museums’ presentations of Native culture. He raised the Museum of Contemporary Native Arts (MoCNA) in Santa Fe, New Mexico, as a model for successfully promoting Native artists as “living people” with “tribal sovereignty” and “indigenous knowledge.”  Their presentations approach the ultimate goal of ending tokenism and Native culture filtered by the lens of White culture. Rangel concludes that most museums continue to ignore White colonial history and Whites’ conquest and methodical destruction of indigenous culture.

As artwork from ethnic minorities gains wider recognition, it follows that other artists might begin adopting some of the minorities’ culture and visual language into their own work. This practice causes questions to arise. Is it ethical for an artist to use the cultural iconography of another culture?

Can minority artists ask for an equal place on the global stage, divorced from their ethnicity, while at the same time, claiming a proprietary ownership to the visual language of their ethnicity? Does this claim prohibit the natural artistic process of cross-cultural fertilization? Can a culture claim ownership of stories?

In an article entitled “Art, authenticity and appropriation,” James O. Young noted that while many minority artists clamor for acceptance in the mainstream art world, they often bristle when the mainstream art world adopts any of their own ethnic imagery or ideology. Young, who heads the Department of Philosophy at Canada’s University of Victoria, observed that many ethnic minorities assert that “outsiders” are incapable of using styles, patterns, stories, and ideas from another culture.

For example, can white musicians successfully use a genre developed by African Americans, such as Mississippi Delta blues? Young’s research indicates that artworks derived from other cultures can be excellent. He focuses on whether or not there can be successful mastery of another culture’s technique, and does not consider the appropriateness of doing so.

In a different context Young has considered the difference between offense and “profound” offense. He has observed that a sweaty, unwashed passenger on a bus is simply offensive. “Profound” offense, however, is something that deeply affects moral sensibilities, such as a neo-Nazi’s parade in front of a Jewish synagogue. He notes that the demarcation between cultural appropriation that is offensive, and that which profoundly offensive, and therefore inherently wrong, is difficult to define.

In weighing the social value of freedom of expression, Young concluded that although people may find cultural appropriation offensive, offense alone does not make the appropriation morally and ethically wrong.

Walter Benn Michaels has posited that our current focus on appropriation distracts from the real problems.   He contends that stories do not belong to anyone, and that dominance of one culture over another is the real demon. Fighting over cultural appropriation detracts from the important battles for equality.

Several publications have discussed the evolving field of museum ethics. One is National Standards & Best Practice for U.S. Museums, produced by the American Alliance of Museums and edited by Elizabeth Merritt, the founding director of the Center for the Future of Museums. The book sets forth guidelines for excellence and integrity in museum work and discussed the overall missions and goals of exhibiting institutions in the 21st century.

Another has been a research article by Andromach Gazi, professor of culture at the Panteion University in Greece. Gazi observed the changing nature of ethics over time, and concluded that the main goals of museum ethics are “social responsiveness,” “honesty” in regard to all audiences, and knowledge of and engagement with the community in which the museum is located. Gazi’s paper describes the evolving ethics of exhibiting sacred objects, of interpretation, and of authentic voice.

Two other publications recommend steps to end Eurocentric dominance in museums. Susan Donley’s “Cultural diversity: The museum as resource” has been distributed by the American Association of Museums for decades and it remains in use today.

Donley introduces the psychological concept that individuals pass through four distinct stages before accepting another ethnicity as equal in value to their own. These stages were: 1) awareness of a culture, 2) knowledge and understanding about a culture, 3) tolerance and acceptance, and finally, 4) the desired state of appreciation for a culture. A study by Wendy Ng ,Syrus Marcus Ware and Alyssa Greenberg introduces the concept of “allyship,” in which museum educators create social change through relationships based on social justice, equality, self-reflection, and communication.

Based on all four categories of literature evaluated, one can see that the legacy of white colonialism has led to museums understanding artworks only through the lens of their own culture. This practice disenfranchises and marginalizes the ethnicities whose creations are viewed as inferior. Museums have a moral and ethical responsibility to become more inclusive and represent the full spectrum of arts and culture.

Heather Stivison is the former executive director of the Stickley Museum at Craftsman Farms in New Jersey. She is now working as an interdisciplinary artist with watercolor, acrylics, oils, or fiber.