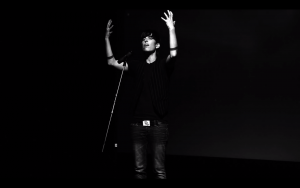 This interview with slam poets Lane Shuler and Jonathan “Courageous” Clark along with commentary and some history of the genre was undertaken by Esthesis editor Rebekah Gordon.

Slam poetry is a competitive form of spoken word that began in the U.S. in the 1980’s in open mic sessions at cafés in cities like Chicago, New York, and San Francisco. Largely influenced by the idealism of the folk movement of the late 50’s and 60’s, sprinkled with elements of Beat poetry, slam believes justice for all is attainable. It functions much more loosely that traditional page poetry, allowing for less restrictive/formal word play.

A slam typically begins with the selection of five random judges from the audience. They cannot be in attendance in support of any poet who will be slamming or slam themselves. A non-competing poet, known as the “sacrificial poet”, then performs. If a judge thinks the sacrificial poet’s poem rated a 6/10, 6 then becomes the new 0. The sacrificial poet becomes the baseline off of which the judges will score all performances that evening.

In a slam, poets are allotted a 3-minute time span to perform any piece of their own composition. This performance occurs without props and, traditionally, without the poem in front of the poet. Slams are most often performed from memory. The judges score the poet on a rage from 1-10. The highest and lowest scores are dropped and the middle three scores are averaged. Should the poet go over his or her time limit, after a 10 second grace period, points will be deducted from the poet’s overall score.

Marc Kelly Smith, a Chicago poet also known as “Slampapi”, is the poet most frequently credited with slam poetry’s start. He founded the National Poetry Slam in 1990 and over 25 years later, that competition is still occurring annually. He gave a great TedX lecture on slam that you can find here.

As a spoken word poet, I have witnessed and participated in many different slams. There are some poets who are laughably bad. They get drunk before performing because their nerves get the best of them and read a stilted, poorly constructed poem from a page. There are other poets who craft stanzas so beautiful and appropriate for the moment that I cry, and swear I’m never writing another poem because I can never match what I have heard. But regardless of talent – poetry slams, while competitive, are places where the art of crafting words is supported. So even if you’re the nervous drunk guy who can barely stammer out his piece, you’ll find encouragement.

It was in 2010 as part of the Knoxville Poetry Slam team Lane Shuler and Jonathan “Courageous” Clark met. They led their team to Group Piece Finals at the National Poetry Slam in Boston, MA in 2011. After the NPS and an unsuccessful submission of a piece to Verses and Flow, the two men began writing more pieces together and turning some of their older poems into group work. They hit the road for some touring, colleges began taking interest, and this is how I.N.K. was born.

I.N.K. now runs a monthly poetry slam the second Tuesday of every month at Open Chord in Knoxville, Tennessee. The duet educates students about slam poetry at both the high school and college level, in addition to their continued performances as poets. They teach students everything from writing and performance to how to start their own campus poetry slams. I had the privilege of interviewing I.N.K. and getting their take on spoken word/slam poetry.

RG: How did you come to host the Knoxville Poetry slam?

Courageous: When I was 21, I was probably the most consistent poet showing up at the slams. I had been attending regularly since I was 14 and was a mentee of the, now former host, Rhea Sunshine. She taught me everything I know about running the slam and how to do everything on your own and still provide a space for our community to feel comfortable expressing themselves. She got married and decided to step aside to start her beautiful family and handed me the “keys.”  I kept it going for 5 or 6 years alone, as we kept coming up on bum luck with venues closing or changing their free nights. Finally, Lane Shuler came aboard to help out and we realized we not only made a pretty good team during poems, but that in between, before, and after we’re pretty entertaining as well.

RG: What made you want to work as a duo?

Courageous: I think we really enjoyed the freedom of having someone back you up on stage. We think we’re pretty good as a team. It takes a lot of work to build a chemistry in stage and to memorize and perform the way we do. A lot of people come to us after a show and tell us they’ve never seen anything like it on stage. We work well together and find that we both bring strengths to the duo. We also equally enjoy the thrill of being on stage doing what we love. There’s absolutely nothing better.

Lane: I was starting on the college market as a solo poet and I simply didn’t like it.  I knew how successful Courageous and I had been, and i knew that on a personal level we got along really well.  It is way more fun traveling as a pair!

RG: Who inspires you?

Lane: Asia Samson has always been a huge influence on us from a style perspective and from a career perspective.  He taught us everything we know about making a career out of poetry.

Courageous: There are probably a hundred people I could name… but I always think back to the time I was lucky enough to sit 5 feet away from Saul Williams performing. It was one of the most memorable and inspirational experiences of my life.

Lane: Audience participation.  You can yell at your poetry book all day long but it won’t change how the poem is written.  An audience can entirely change the way a poem is delivered just by the energy they give off.

Courageous: The fun of slam to me is the aspect of competition. There are so many thrills in trying to win a round, a competition, compiling a strategy. There have been books written on the way to do it well. I’ve won individual competitions, but I’ve never been a part of the winning team. I think I’d still love to do that one of these days.

RG: Why is slam important? What does it accomplish that other art forms don’t?

Courageous: The more I learn and the more I speak, the more appreciation I find for this art form. There’s real therapy in speaking and telling one’s story. To edit the voice your heart speaks and make sure its words are clear and concise is a luxury we don’t have in everyday conversation. I learned a long time ago from my work with the Carpetbag Theatre in Knoxville, “if your words are never heard, the world goes on without them,” and to me, that is the greater tragedy known to man.

Spoken word leaves less to be interpreted. With music, one can feel the tempo and the changes and the beat. With visual arts, one can recognize colors and textures and make educated guesses on what the artist was attempting to convey. But there’s nothing like the spoken words of poetry. There may be metaphors or analogies listeners don’t quite understand, but if it’s been really practiced and the artist is confident in its completion, a poem can send the audience on an inarguable journey.

Lane: It’s important because the audience is listening.  People who hate poetry will be caught in slams with tears in their eyes and smiles on their faces. It’s something page poetry sometimes can’t accomplish, because the person who will never crack open a poetry book, may accidentally find themselves in a bar on the right night.

In some ways, spoken word is a combination of many art forms.  It can provide the power of music, with the clarity of stand up.  I’ve heard it referred to as stand up tragedy before, which I think is a bit unfair to funny poets.  Music may be powerful to someone, but the lyrical message may be hard to convey or understand.  Poetry strips away the music and has to rely entirely on the message.

RG: Is there a particular style of slam that you dislike?

Lane: The “number poem” is particularly tired.  It’s where you make a list of things and say the number before each point.  It can be done well, but I’ve heard it so many times I’m tired of it.  It’s also a particularly easy type of poem to write because it doesn’t require transitions between your segments.

RG: As we finish up here, what piece of advice would you like to leave aspiring poets with?

Courageous: WRITE! There’s no such thing as writer’s block. You always know words, you always know how to put a pen to paper. Keep writing until it comes. Don’t make the mistake of thinking every word you write has to be finished poetry. It won’t be. It’s frustrating and annoying, but you have to write your way through it.

Lane: Try to find non-traditional speakers, and lesser known poets to build your style on.  Poets have really started to homogenize a bit in recent years, and I think standing out is going to be important.  I’d also encourage young poets to spend time in acting classes, because at the end of the day, no matter how powerful your poem is, it’s going to become an “act” once you’ve done it thirty times.  Also, being able to “act” may allow you to put things in the open that may have been too personal for you to talk about otherwise.

If you’re interested in seeing what I.N.K does, their handle on all social media platforms is INKspokenword. They love to travel and educate, and would be thrilled to come talk to/perform for your students or campus.

Slam poetry has been slammed (pun intended) by literary elitists as a movement that has denigrated poetry to the level of tv sitcoms and fast food. But what slam accomplishes is putting poetry back in the mouths of people. While it may sometimes lack elegance, it empowers in a way that cannot be overstated – it provides a place to speak for those whose voices traditionally go unheard.

Issues of race, gender, and sexuality can be publicly discussed and explored alongside topics such as Shakespeare, the weather, and lost loves. No topic is sacrosanct. I have heard people perform pieces about their own rape. I have heard break-up poems performed by people whose exes were in the room. I have heard poems about how parents don’t feel the way they are supposed to about their children.

And I have watched the hurting, broken, and disempowered be taken seriously by strangers. I have seen those people surrounded by said strangers with congratulations, encouragement, and offers of a beer. I’ve also witnessed poems that include unsent love letters to Taylor Swift and emcees who tell pirate one-liners all night (thanks I.N.K.).

At a slam – there is room for all, and, for just a few hours, humanity is at its best.