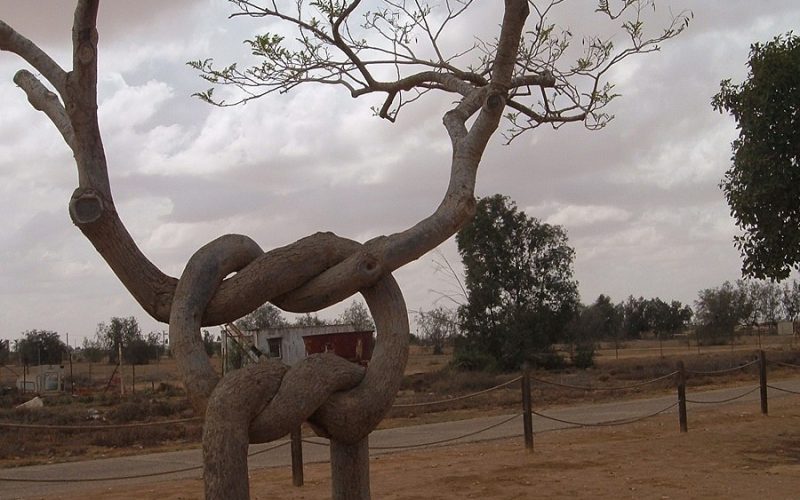 The following is the second installment of a two-part series.  The first one can be found here.  Translation from Hebrew: Daria Kassovsky.

Representation of the Israeli-Palestinian Conflict: Landscapes and Maps

In the local history of landscape representation as territory, concurrent with the development of the landscape motif in national-Zionist art, landscape in Palestinian art has also played a key role in the construction of national identity.  Scenic maps evolved as an expression of the conflict between two epistemes, and at the same time—as an embodiment of the territorial conflict between Israel and the Palestinians.

The Zionist movement considered itself as a movement of a return to the place – a place at once geographical and transcendental: “God is the place of the world, but the world is not His place” (Genesis Rabbah 68:9). A place which is present-absent must be represented and signified.

The Eretz-Israeli vistas, which were common images in the renewing Hebrew poetry, were the habitat for the New Hebrews, but the tension between the physical reality and the landscape observed through the lens of ideology never ceased; it was only enhanced by Zionist education, which was a powerful lever in the construction of a new Israeli identity.

Abraham Jacob Brawer, the author of geography text books in the 1920s and 1930s, regarded knowledge of the Bible and Mishna as a supreme value in geography, a keystone for the bond between the people’s past and its present in the Land of Israel. In his books he linked the map, hike, and aerial photographs to form a pedagogical instrument. The field trip, hike, and journey had been placed at the core of Zionist existence from its onset.

Touring the land and learning its geography honed the gaze at the landscape, and the maps which mediated it became a national icon, much like the one on the façade of the pushke—the Blue KKL-JNF (Jewish National Fund) Box which “was more than just a fundraising device. From the beginning, it was an important educational vehicle spreading the Zionist word and forging the bond between the Jewish People and their ancient homeland.”

Thus, it is not surprising that visual art created in pre-state Israel surrenders processes of re-territorialization of body and landscape alike. These processes evolved simultaneously with the demand for a local Eretz-Israeli painting, in keeping with the newly- shaped figure of the New Jew (or the New Hebrew).

Despite the stylistic differences between the Jewish artists who operated in the country in the first decades of the 20th century, one may say that the works of such artists as Ze’ev Raban, Reuven Rubin, Nahum Gutman, and others reflect a landscape ideal, structuring it as wishful thinking rather than as a reflection of reality. Even the lyrical, vibrant landscape paintings by the New Horizons artists did not evade the place.

They reinvented it as a modern locus in their aspiration for abstraction. The panoramic gaze or the one mediated through window and bars often likened the compositional grid to the act of marking and mapping. At the same time, the artists’ blindness to landmarks, such as the vestiges of Arab villages, attests to their instrumental, ideology-driven vision, even when they genuinely declared that art must be autonomous and universal.

With the flourishing of conceptual art in the 1970s, maps became more prevalent, as evident in Deganit Berest’s series “Maps of Eretz Israel with a Rhombus” (1976). During the 1980s, “painted” maps also appeared in the work of artists such as David Reeb (“Self-Portrait with Green Line”, 1980), Michael Sgan Cohen (“Map”, 1980), and Atsmon Ganor (“Untitled”, 2002), who frequently engaged in maps and preceded the “genre” of scenic maps.

The most extensive project in this respect, however, was Michael Druks’s “Druksland” (1974), a body of work including his self-portrait in the form of a map, with the inscription “Occupied Territory” on his head—the ultimate political manifestation of man’s consciousness as the image of his homeland. According to Galia Bar Or, who studied his oeuvre, “Druks’s subversive action in the mapping works is similar in principle to his action in the spheres of video and measurement.”  In Druksland, man himself is the subject and agent of the space, and the space is perceived as body and as landscape.

Generally speaking, in Palestinian art the landscape is explicitly presented via the romantic-national or modernistic expression regarding people-nation-art interrelations, and by means of postmodern strategies. On the one hand, the landscape embodies a claim for spatial ownership prior to its political realization, and on the other  – a mental map of memory and yearning.

It is within this complex situation that artist and architect Hanna Farah Kufr Bir’im operates. An extensive exhibition of his work, “Re:Form,” was staged in Zochrot Gallery, Tel Aviv in 2010, and over the years he has initiated various artistic projects in the area of Kufr Bir’im, the village from which his family and all other residents were expelled in 1949, with the promise of return.

His works present landscape and map, both in need of restoration and healing. Photographs presenting the landscape of the place and traces of the village, etchings, as well as architectural and topographic models comprise a body of work that offers diverse representations of reconstruction and rehabilitation of memory. The works function on the artistic-conceptual level, while proposing possible steps toward an actual return, forming both a landscape rendition and a cognitive map.

According to Juval Portugali, cognitive maps are tied with internal representation of the external environment in terms of the individual, the collective, and the history of that collective, indicating the interplay between external and internal representation. Just as “a man’s conduct in a space derives not only from the objective structure of that space (as symbolized in an ordinary cartographic map), but is largely dictated by the image of the space as sketched in his consciousness, namely—from his cognitive map,” so its artistic representation is affected by it.

The same internal image of the space is a type of imagined landscape. Moreover, collective cognitive maps may include realms of memory or of passion. Hence, cognitive maps result from map-space relations, forming the ground on which the mapping practices of scenic maps are applied.

Between Landscape and Map: Scenic Maps

Scenic maps expose three major practices, as defined by Irit Rogoff: re-mapping, un-mapping, and counter-mapping. These seem to respond not only to historical, cultural, and artistic processes—which, in the Israeli context, are profoundly linked to Zionist settlement and the Israeli-Palestinian conflict)—but also, as aforesaid, to mental maps, mythical depth structures, and their manifestations on the surface.

A distinctive engagement with the territorial myth is seen in Gal Weinstein’s works. Repeatedly constituting an imagined reality that oscillates between topography and landscape, he created scenic maps as floor installations that unfold at the viewer’s feet, denying him entry; landscape which deliberately fails in its panoramic function, while interfering with the spatial imagination.

In “The Valley of Jezreel”(Herzliya Museum of Contemporary Art, 2002) and Huleh Valley (Helena Rubinstein Pavilion for Contemporary Art, Tel Aviv Museum of Art, 2005), Weinstein employs the iconic-cultural image of the landscape itself, while creating an interplay between mapping and un-mapping. He removes the map from the landscape, which is thus revealed in all its seductive beauty, and at the same time—covers and flattens the landscape by means of the image of the map. His maps question right and wrong, whether “to step or not to step,” distorting any aesthetic or scientific distance.

Scenic maps are a unique category within the broad field of convergences between landscape, body, and cartography. This hybrid genre, arising from the conflict between different types of representation—landscape vs. map—brings all these ingredients together, yet still embodies the conflict. A gradually expanding genre, recent years have seen remembering maps, covering maps, revealing maps, embroidered maps, soap maps, rug maps and floor maps alluding to the local landscape, featured in such exhibitions as the Fourth Biennale of Israeli Ceramics, “Territory and Identity: Between Ceramics and Architecture” (Eretz-Israel Museum, Tel Aviv, 2007; curator: David Knafo), and the 2009 exhibitions “Landscape” and “Urban Nature” at Petach Tikva Museum of Art (curator: Sigal Barkai).

Map images have even taken the form of defiant jewelry, as in Einat Lider’s stylized abstract brooches which represent Arab villages wiped out of existence. Her 2008 exhibition “Order Restored” (Periscope Gallery, Tel Aviv) featured six brooches. Each represented a part of the Tel Aviv-Jaffa map, and was centered on an Arab village that no longer exists: Summeil, Sheikh Muwanis, Salama, Manshiya, Jamasin, and Abu Kabir.

The map functioned as a mythical image, and the act of mapping extended over diverse media, deviating beyond the gaze (which constitutes a painterly landscape) to action, motion, and journey. Mental maps and scenic maps, maps of belonging and landscapes of identity were juxtaposed to expose their nature as constructs that strive to appropriate a territory.

Questions of physical-bodily memory and intersecting histories are reinforced vis-à-vis an ongoing reality of territorial strife established as a space signified by a wall, roadblocks, restricted freedom of action, settlement uprooting, house demolitions, etc. Based on the wordplay land(e)scape, and after scholar Paul Virilio, one may argue that the landscape is a plane of flight, a temporal horizon indicating emergence from, an evolving space, or a spatial occurrence. Hence, the transitions between maps and landscapes have exceeded national visions and the conflict of representation, even the representation of The Conflict per se.

As a hybrid form, scenic maps are an intermediate representation of the place, whose images are generated by deconstruction, unmapping, reconstruction, and counter-mapping practices, seductive on the one hand, contemplative and challenging on the other. Their existence is dependent on the cultural network and visual correspondences within local history. Not only man is the image of his homeland and native landscape; the landscape, too, is dialectically an image of man, his passions, and spatial conquests.

Yael Guilat is Head of the Program of Multidisciplinary Studies in the Humanities and the Arts at the Faculty of Graduate Studies with the Oranim Academic College of Education in Tivon, Israel.  Her work focuses on intersections between gender, identity and memory, especially on its manifestations in the public space.