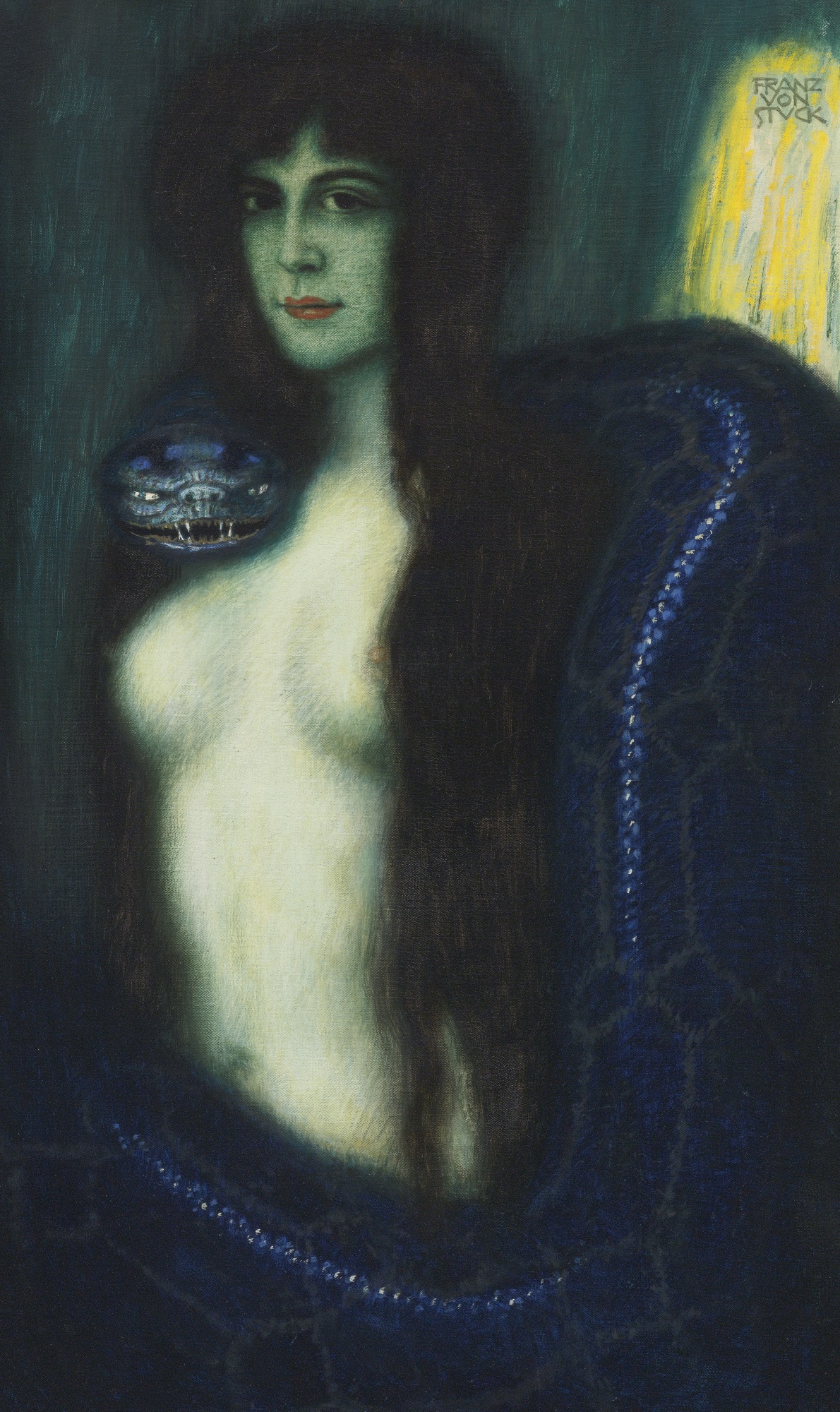 In French, femme fatale means a “fatal” or “disastrous” woman. She is often one who attempts to attract or snare men. The definition of femme fatale from the Merriam Webster Dictionary is either/both a seductive woman who lures men into dangerous or compromising situations and/or a woman who attracts the male by an aura of charm and mystery. Femme fatales have been present throughout history and the arts, including film and visual art.

In ancient mythologies many goddesses were femme fatales – eg., Aphrodite, Eris, Persephone.  Moreover, they could also be majestic monsters such as the sphinx, siren, nymph or any other natural female creatures. In the Bible, Eve was technically a femme fatale because she tempted Adam to eat from the apple of knowledge. Throughout history, femme fatales were often viewed with snakes, since they, too, were dangerous and were often times associated with femme fatales. Femme fatales in film often represented art or historical references from the past.

Edvard Munch was a Norwegian painter who painted The Scream, a masterpiece of modern art. Munch was a symbolist as well as an expressionist painter who influenced German expressionists such as Gustav Klimt. Munch painted many themes including emotions, the human condition and females. Many of his paintings pulsate with energy, a feeling one also experiences when viewing artwork like Van Gogh’s Starry Night.

In 1885 Munch traveled to Paris. He was tremendously influenced by the artistic styles of the impressionists Monet and Manet as well as the post-impressionists Van Gogh, Cezanne, and Gauguin. Munch created many paintings using a variety of themes. It is evident from his body of work that women were usually found in each one, especially the femme fatale.  Munch was intrigued by how the female can overpower men by the force of allurement.

As mentioned previously, the painting was first called “Vampire” by Munch’s friend, the critic Stanislaw Przybyszewski. Przybyszewski saw the painting on exhibition and described it as “a man who has become submissive, and on his neck a biting vampire’s face.” It should be noted here that another term for the femme fatale is a “Vamp”.

There was a lot of criticism towards Munch’s painting. People at that time were both in shock and awe of it. Criticism of the painting includes the belief that this is a reference to Munch’s visits to prostitutes. Others saw in it Munch’s fascination with death. Love and Pain (Vampire) is part of the series known as the Frieze of Life, which also includes The Scream. The Frieze of Life was a series based on human emotions and conditions, including anxiety, melancholy, separation and puberty, that affect everyone. These emotional conditions were painted by Munch. Much of his work references this in the title of the individual pieces of art.

In Vampire, the female has long flowing fire-red hair. Some historians believed that the red hair symbolized love; while others felt it was unsettling, designed to make the viewer uncomfortable. Many historians also saw that the red hair symbolizes the arteries in the body needed for vampires to suck the blood out their victims. Overall, Munch’s Love and Pain, often symbolizes the true meaning of femme fatale or vamps. To this day this painting still shocks, awes and intrigues viewers, making them wonder what exactly the woman is doing.

Another symbolist painter was Austrian expressionist painter Gustav Klimt. He, too, believed that there was something seductive about a woman who makes men fall for her charm, grace and mysterious nature. This is a common theme in many of his works including The Kiss, Jurisprudence, and Beethoven Frieze. Two paintings from Gustav Klimt, Judith I and Judith II, both symbolize the femme fatale because Judith is a Christian hero who beheaded Holofernes, general to Nebuchadnezzar II king of Babylon between 605-562 BCE. The event was written about in the Biblical text, the Book of Judith. In Klimt’s renditions, Judith I is a more seductive woman wearing an open shirt. This makes her appear dreamy and sensual, a femme fatale capable of deceiving and

Austrian professor Franz A.J. Szabo characterized Judith I assymbolizing the “triumph of the erotic feminine principle over the aggressive masculine one,” because in the painting Judith shows an expression of pleasure, pride and sensuality since she has successfully killed her victim. Author and critic Felix Salten described Judith as “with a sultry fire in her dark glances, cruelty in the lines of her mouth, and nostrils trembling with passion. Mysterious forces seem to be slumbering within this enticing female…” In Klimt’s Judith II, Judith was posed with sharper traits and fierce qualities, so much so that critics mislabeled her Salome. Because of this, Gustav asked his brother to make a metal frame labelled “Judith and Holofernes” so that viewers and critics would not misinterpret his art.

Apart from Munch and Klimt, Franz Stuck, a German painter, also believed in the ideas of femme fatalism. He believed that feminine power could take over masculine power using seductive behaviors and mysticism. The woman in The Sin, painted by Stuck in 1893, portrayed Eve wearing a snake. In this case the personification of the femme fatale and sin was Eve, a Christian biblical figure who enticed Adam to eat the apple of knowledge. As a consequence, both Adam and Eve were exiled from the Garden of Eden. In the painting Eve stares right at the viewer in a seductive way. Beside her the snake is watching defiantly, daring the audience, challenging the viewer. The snake is Eve’s companion or pet, protecting her from the viewer.

Again, femme fatales were sometimes associated with snakes. In The Sin, this is clearly shown. The snake is almost completely wrapped around Eve’s body. This creates apprehension for the viewer because the snake is the embodiment of evil and is looking at you. Eve’s expression is anxious, creating a feeling of danger because of the inclusion of the snake.

Stuck’s other famous painting is Salome, painted in 1906, shows a fierce femme fatale. Salome was the daughter of Herod II and wanted John the Baptist’s head, just like Judith desired Holofernes’ head. In the painting Salome’s face shows ecstasy, joy, sensuality and pleasure after the beheading of John the Baptist. We understand this because she is dancing while a black servant brings her his head.

Other artists have also referenced the subject of femme fatalism. Manet’s Olympia, painted in 1863, shows a relaxed nude female looking straight through us. Olympia looks past us as if we are invisible to her. Olympia is seductive. Although she is nude and shows her breasts, she covers her pubic region signifying that she is enticing us to look at her more.

Furthermore, Arthur Rackham’s The Shipwrecked Man and the Sea portrayed the sea as a femme fatale, hundreds of times larger than the man in the painting. Rackham decided to do this because he felt that females were mysterious. Also, in mythology water creatures such as sirens, dryads, and the water itself, were usually female. The sea in the painting looks like she is preventing the man from escaping her. She is keeping him on the shore as a prisoner.

Aubrey Beardsley was another artist who focused on the femme fatale theme. In Salome: The Dancer’s Reward and The Climax, Beardsley used Oscar Wilde’s character Salome to his advantage by using the styles of aestheticism and Art Nouveau. His black and white images created a dynamic contrast to the rich oils used in previously mentioned works of art. This created a sense of sleekness and decadence in his works of art and could be seen as a preview to the opulence displayed in the Art Deco period which would come in the 1930’s.

Today femme fatalism continues to be used in film, photography and other artforms. Theda Bara, an actress who first appeared in A Fool There Was, was widely known for her vampire like representations on screen. Throughout her movie career, Bara acted as an efficient femme fatale. In the movie Gibson Girl, Charles Dana Gibson noted that “in her dark eyes lurks the lure of the Vamp; in her every sinuous movement there is a pantherish suggestion that is wonderfully evil…” signifying that her features were femme fatalistic.

That led to other femme fatales being widely used on screen. Bette Davis, Rita Hayworth, Marilyn Monroe and Angelica Huston are some examples of women who portrayed femme fatales on screen. Kim Carnes even sang about a woman being “ferocious” because she had “Bette Davis eyes” in her hit song of the 1980’s.

Though the term femme fatale was created in 1912, over the years this theme has influenced every platform and aspect of art. By the time the 1960’s arrived, the feminist revolution began and women celebrated the idea of the femme fatale as a way of empowering women. Artists such as Judy Chicago and the Guerrilla Girls were prominent artists who were in the fight for equal rights for women. An example of women encouraging other women to fight for equal rights is Judy Chicago’s Dinner Party.

In this sculpture, Chicago portrays a dinner party for prominent females throughout history. Her message was that throughout history, women have been as powerful as men at changing the world. She wanted feminists to recognize that women, by being femme fatales have power over men, could therefore change the outcome of events. An example of this would be Theodora, the wife of Justinian, Byzantine emperor from 527 – 565 C.E. Theodora was so feared because she brought women’s rights to an empire where women had very little say in every day life.  Others beside Judy Chicago feminists have been rewriting art thanks to the femme fatales in history and art.

Lastly, Gail Potocki, born in 1961, is a female symbolist painter. Her paintings of modern day people with old ideas often portrays prominent ideas involving the femme fatale. One painting titled Inquisition, painted in 2003, shows Eve holding an apple branch. Entwined in the branches is a snake gazing up at Eve. This painting is similar in content to Stuck’s The Sin.

Potocki explains the painting as follows: “Eve grasps the apples in her hand as she confronts the snake, not being led, staring the serpent squarely in the eye as an equal.” This description clearly shows that snakes and women often can be portrayed as symbols of a dominant feminine power.

Another great painting that shows femme fatalism is Adam and Eve, a diptych. Both were painted in 2006. Potocki again uses the same theme as in Stuck’s The Sin, with Eve and the snake as the prominent features in the paintings. The snake is circling around Eve’s body, similar to  The Sin. However, the snake’s head is not pointing towards the viewer, but toward Adam. In these canvases the apple plays a significant role with femme fatalism and the role of good and evil. The apple here is associated with temptation, even though apples can at the same time represent knowledge.

Overall, femme fatalism has been portrayed in art since myths were created, and it is still being used today. Femme fatales have influenced the language of art and media, and have helped propel the feminist revolution of the 1960’s. Femme fatales have been important to the development of mythology, to religion and to the artists throughout history, up to and including modern times.

Eric Galowitsch is a freelance artist in Toronto, Ontario, Canada and an art student at York University.