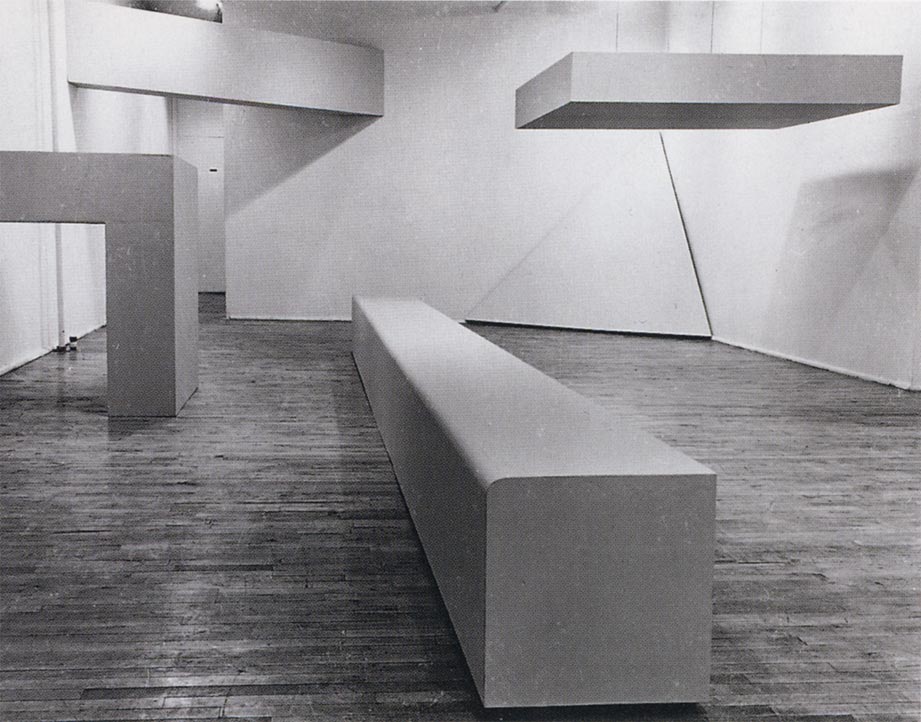 The encounter with art.

While great benefits exist in the application of these theoretical structures towards the “understanding” of a work of art, it yet does more. As the French philosopher Jean-François Lyotard said in his Critical Reflections, “it harbours within it an excess , a rapture, a potential of associations that overflows all the determinations of its ‘reception’ and ‘production’.”(93)

It grows, builds, bubbles out, flows, and shimmers its way into the viewer’s space into a new space. Ready or not. It is this action, the affect, this specific function of this “artmachine”, that I want to explore. Once one is aware of the prerecognition, prepersonal affect, can this moment successfully be brought into representation by a written critique?

First, I look at affect. I discuss what I mean when I posit that affects are that which cause the bodily feelings induced by the encounter with an art object that births change a “becoming”. These feelings belong to the body and are distinct from emotion. These feelings also belong to the object itself in an immanent sense. In the affect of art there is a coupling, joining, rhizomatic “becoming” between the artmachine (object) and the subjectmachine (viewer).  Then, I propose a method not of reification of the affect, but a method of participation with the affect, a blooming of both deconstruction and affect. I propose a use of semiotics not for decoding but for experience, a project similar to that of art, a production of production, not a production of object.

In short it is a call for a critique that does. I close with a case study an experiment.

Immanuel Kant and his legacy through aesthetics offers some insight into the aesthetic experience. He acknowledges something special happens in the emotions, intellect, and imagination in the presence of the beautiful and sublime. This experience of the object is apart from its usefulness.

As such, an appreciation for this object ought to be experienced in a disinterested fashion with no thought to its utility. A rose is best enjoyed when not thinking about how to eat it. This experience he contends is also universal. That if an object arouses in a viewer a pleasurable experience, all other people ought to be able to experience the pleasure as well. This, he argues in Critique of Judgment, is because the response to the experience is something transcendental, grounded in but not “contained in nature”. The destination of this experience is from a place beyond the object and beyond the viewer.

Clement Greenberg similarly argues the aesthetic experience ought not get soiled by the things of this world (politics, religion, artist’s biography). It was to be appreciated at a distance. It was to be experienced on Clive Bell’s “cold white peaks.” The assertion is this aesthetic experience is something foreign to the world life. It is from an idealized (utopian) place beyond. Art, in this view, provides an escape, a transportation, from here to the alien unrealized utopia.

But can another option exist? Is it possible to understand an art encounter without referring to some (im)possible utopia? There have been no lack in attempts to answer this question. But of the most compelling answers have to do with affects. Lyotard understands the aesthetic experience, which he calls affects, as the overflowing and rapture of an object. (93)

That is, there is an excess within the object itself. Brian Massumi in “The Autonomy of Affect” also thought of the immanence of an object, he understood the affect as a moment of intensity enacted on the body. (89-90) Alain Badiou describes affect as the “event site” : “a point of exile where it is possible that something, finally, might happen”.(84) Each of these men dealt with and argued against transcendence differently, but they each understood affect as that which arises in the body in the encounter with art. There is no looking “through” art, only looking “at”. And most prominently in the writings of Massumi there is a return to the body and away from cognition.

First, a science story as told in Massumi’s “The Autonomy of Affect”. In a study coordinated by Hertha Sturm, children were wired and shown three versions of a short video. The video told a story about a snowman. First, a story dubbed on top of the video was told in a cold and factual way.  Second, the story was told in an emotionally charged tone. Finally, the story was told with only the moving images no voice. This image only story was rated most pleasurable by the children, while the emotional telling was best remembered, and the factual was the least pleasurable to the children. They were then instructed to rate the scenes on a scale of happy to sad and then on the scale of pleasant to unpleasant.

The results were surprising. The saddest scenes were also the most pleasant, and the happiest scenes were the least pleasant. Also curious was finding the factual telling of the story resulted in a decreased galvanic skin response while the image only version caused an increase.  The galvanic skin response test measures the autonomic reaction. And as Cox and Stone note, the “autonomic reaction refers to a number of physical changes, including increased respiratory rate or hyperventilation, palpitations, flushing, and gastrointestinal disturbance, which most frequently occur in response to anxiety-provoking or potentially dangerous stimuli.”

In other words, it was the image only version that elicited the strongest bodily response.

Several implications are worth gleaning when considering this study. First, in regards to intensity, negative emotion (sadness) is the most pleasant. The relationship between intensity of arousal and emotional interpretation is counterintuitive. Next, factuality is a turn off. Explaining something lowers the galvanic skin response. Next, form and content are not necessarily coherently linked. With the exact same form, there were three different experiences.

Next, with phrases like, “I feel sad”, “that was a touching story”, and “ He is an abrasive individual”, what the English language already assumed, this study proves, that affect is an issue of skin and body, not of emotion. And finally, most important to the issues of art that I discuss, there a perception of danger, a threat, that results from the encounter with an image. There is a force that demands from the viewer a fight or flight.

I submit that one of the primary avenues of travel of affect from art is through the feeling of imminence of danger. It is a snake under foot. The form positions itself in the world of the viewer and demands a reaction. You know you are outside. You know snakes live outside. You know of the possibility of a snake beneath your foot. But its form, in its presence, is jolting. The form has been moved from the world of the possible into the actual. Into your world.

Before you can perform its full zoological classification it has arrested your consciousness. There has been a rupture of your world a crack. A break of habit. The threat is not transcendental. The threat is a world that is here and now. It is full of force, a bloc of sensations . You are aware of its positioning from your body.  With threat comes a choice. One is of inaction which I do not wish to address. But it can be chosen. The more responsible actions involve fight or flight. But there is an option that combines the two which is the “deleuzoguattarian” fleeing. In A Thousand Plateaus Gilles Deleuze and Félix Guattari lay out a groundwork for understanding their concept of flight. In fleeing one escapes, not as a coward, but in an act of aggression. One flees in gathering weapons.

In “The Heterogenesis of Fleeing”, Gerald Raunig lays out a few helpful thoughts concerning this specific ‘kind’ of fleeing. First, “Fleeing…does not mean something escapist or pacifying, on the contrary it is an extremely active affair involving the continual search for the newest weapons.” (45) He continues explaining that in fleeing one creates lines of flight. These lines of flight are not taken into imaginary or other worlds but rather into newly created real worlds that are here and now. But this is not painless. There is a sense in which in the act of fleeing one becomes a traitor unto him/herself. That is, you become something new in direct opposition to before.

As a result, fleeing is not an “empty movement” it is an invented line and therefore productive. Finally,fleeing is not a “‘flight from’…but an absolute concept. It is a being against.”(45-49)

Raunig describes a kind of aggressive/actual/selfinflicted/flowing/producing/beingcreating flight. With this considered it is apparent that this type of fleeing is not passive. But to help visualize this concept let us look at another uniquely deleuzoguattarian model, that of the rhizome. The rhizome grows and expands and creates with no hierarchical schematic. It bubbles out from itself to recreate itself into an ever expanding space.

The lines of flight are ways to create more rhizome in every direction even at different speeds. It is truly multidimensional in both time and space. In this model distinct categories are enveloped, by both itself and others and becomes something new in a continuous flow of deterritorialization. As Simon O’Sullivan in his Art Encounters points out, “a rhizome then fosters transversal connections and communications between heterogeneous locations and events.” (12)

Back to art. Back to the encounter. Between the affect producing art and the subject producing viewer occurs a change, a rupture in the habitual modes of existence. Both are changed forever in the encounter, in the affect, of a work. From the lines of flight, through the process of fleeing, a new world has emerged. As Robert Morris in “Notes on Sculpture 4” describes it, “once a perceptual change is made, one does not look at it but uses it to see the world.” (881)

I now turn to Morris as he was largely responsible for articulating the perceptual side of Minimalism. In his work, and indeed much of Minimalism, the objects intrude into the space of the viewer. The viewer becomes aware of what once was a neutral space and their presence in this now activated space. The artwork obstructs the viewer’s place in the room, and works as an act of figure / ground reversal. The walls, corners, and floor in relationship to the viewer become as much a part of the art as the object itself. Morris writes that art “gets caught in plays of relationships between transparencies and solids, voids and shadows and the parts separate and the work ends in a kind of demure and unadmitted composition.” (881)

He continues, “ What art now has in its hands is mutable stuff which need not arrive at the point of being finalized with respect to either time or space. This reclamation of process [as opposed to finished object] refocuses art as an energy driving to change perception.What is revealed is that art itself is an activity of change, of disorientation and shift, of violent discontinuity and mutability, of the willingness for confusion even in the service of discovering new perceptual modes.” (881)

Jeremy LeMahieu is an artist, writer, and teacher. His academic work and artwork explore issues of ontology and failure. He graduated from Bethel University (St. Paul, MN) with a BA in art education in 2006, and he received his MFA from the Savannah College of Art and Design (Savannah, GA)  in 2016.