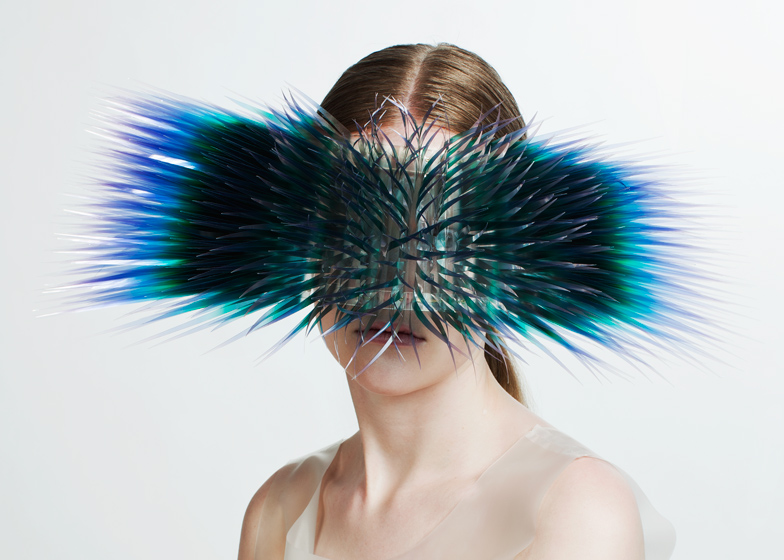 Contemporary artist Maiko Takeda creates futuristic, ethereal garments for the human body influenced by environmental phenomena such as wind, by exploring the relationship between the separation of what is body, and what is ‘outside’ the body. Takeda creates visible thresholds for the invisible sense of touch, primarily creating whisker like head garments to construct a piece around the person wearing a garment and involving people nearby.

Takeda explains her work, “Atmospheric Reentry”, as designs which “blurs the boundaries of body to their surrounding environment.”  One particular work from this collection is “Post Matter”, a short video featuring a female model, interacting with a head garment through the sense of touch.

The video begins with the model, the hands resting on the waist whilst wearing the garment. The garment is composed of hundreds of vibrissa feelers, a relation similar to how cat whiskers function to the cat, all held in place by the garment in dependent positions to the body.

As there is added height from the vibrissa, the model appears to be taller and allows the model a certain ethereal presence and grants the model to become a foreign object. In reflecting on the function of cat whiskers, the vibrissa suggests the body’s organ of haptic perception – the skin. The vibrissa acts as auxiliary additions to the body that create a visibility for the invisible matter of touch. “Post-Matter” does not just give pleasure to the model. It does not just simply allow the model to feel around the skin through the vibrissa.

When the light shines through the vibrissa, light projects onto other surfaces, creating images of shadow and photographic light for the viewer to be a part of the performance also. The viewer can be come aware of the ethereality involving the model and gradually, this visual aid begins to form a unity between the skin and the near environment that surrounds the body.

The model and garment begin to turn around as she stands on an un-seeable rotating surface so the whole upper body and garment can be seen as the vibrissa feelers begin to lightly wave from what the viewer perceives as wind. This happening is only suggested through quiet wind chimes, which are perhaps not understood outside of a musical profession.

As David Katz writes in The World of Touch, “no other sense is more able to convince us of the reality of an object that does our sense of touch.” In this instance of comparing ‘an object’ to the tangible, this reflects on reality where wind is also invisible and the body’s understanding of wind comes solely through the ability of the body to touch and be touched.”

The scene darkens, allowing the garment to be seen is it luminous. The illuminating vibrissa give a sense of heightened sensory feel as the sense of touch is increased when visionary sense is diminished. As Maurice Merleau-Ponty notes in Sense and Nonsense, “nevertheless it has been known for a long time that certain blind people manage to represent the colours they cannot see by means of the sounds which they hear.”(49)

The vibrissa make the model appear as though the model could be able to feel through the vibrissa and into the surrounding world as a cat does through its whiskers. The model begins to interact with the garment through physically bringing the hands up to the garment and brushing through the vibrissa, creating a partnership between body and environment, and together, they create a visual bond between each other for the viewer.

Science is not concerned in “seeing” the world but in explaining the world. A blind person’s walking cane serves as a sense. The resistance of objects the cane moves around is communicated through the skin and to the blind person’s brain, whereas a person with the ability to see observes with the eye. In this instance, sight is only an apathetic relation to the body; it is nothing more than external.

Touch however could be argued as something more personal, more internal, more able to reassure the body of its surrounding environment that any other sense.

The skin is the largest organ in the human body system. It interfaces with the environment, giving the skin specific functions it needs to perform. “Haptic Perception”, according to J.J. Gibson, defines the touch system as “the sensibility of the individual world adjacent to his body by use of his body.”. Further to elaborate on what Weber had theorized in 1851: “haptic perception is active exploration.”(6)  The body uses haptic perception by using touch to understand the surrounding world, communicating sensations, and reconstituting the sense of self.

The partnership between skin and environment does not only involve the relationship between body and world, but between what is the visible and what is the invisible. “You cannot feel without body. Everything follows from the body,” Merleau-Ponty has written.  Like the physical body and self, senses develop with the body. Practice improves sense and maturity perfects it, in relation to how the relationship the surrounding environment has on the physical body.

This can be seen in the unity of “post-matter” between model and garment through the use of the vibrissa. The model is seen to be interacting with the vibrissa, as though she is beginning to learn how to use this new sense. The intertwining of skin and environment, through use of sense and tactility in “post-matter”, forms an unbreakable partnership between skin and body where the body cannot function without touch.

Merleau-Ponty argued that vision is merely an appearance, and not necessarily a “true” appendage of the world. For an object that the eye may see, it is not the color what makes what the object is, nor the smell, nor the sound. No sense from an object is a true constitutive of that object, only touch. Touch is the closest the body can get to its outside environment, or to the object.

Every physical object comes with a tactile property, but it is important to consider that all visibilities come from the tangible. There is not only an infringing on the touched but an infringing between the visible and the tangible. Part of the world is invisible but this does not mean this part is any less.

Like wind, like temperature, and like the very first point of touch. They are all without visibility and still, they all very much exist. Our bodies become lost within exploring the invisibilities of the world. The skin is a gateway from the body and into the surrounding outside. The body interacts through it, learns through it, and explores everything that is to follow.  According to Merleau-Ponty, “touch is the opening of a dimension that can never again be closed.”

Through the use of the skin, the body contributes more than it receives, constantly reassuring the body of the world. “Post-matter” illustrates this one- sided relationship throughout the performance, where the model exploits the extent of the garment, pushing it to achieve the body alone cannot. It can feel for the body, it can send signals back to the skin and constantly reassure the body of the surrounding world.

The body does not pair with the world; the body extends itself onto the world, as does the garment.  The body forms tirelessly which gives the body everything it receives and in doing so, the body begins the possible truth of expression.

Larissa E. Shaw is an audio-visual artist at Grand Union in Birmingham, U.K., a Visiting Lecturer at Birmingham City University, and a freelance art critic.  Her work begins with an interest in a natural phenomenon, with current works exploring the articulation and movement of surrounding space around the body in relationship to the movement of sound. Often times, these works come from a targeted period of historical and contemporary research where works have utilised this found research from redundant archives and scientific data.   Larissa’s practice uses and interrogates audio visual art in its broadest definition, informed by the synesthetic relationship between hearing sound, and its triggering effect on the body to feel haptic vibrations.