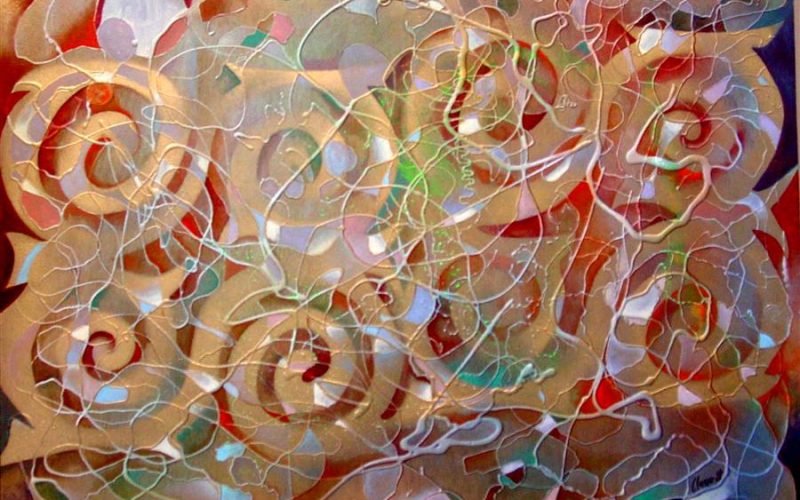 Maltese artist Charles Cassar explored aquatic imagery and marine creatures in his works. His father, a Navy man, instilled in him a love for the sea. Cassar’s art reflects nature’s textures in powerful representations of changing moods.

Charles Cassar spent his early days as a student at the Lyceum. He attended evening classes at the Malta School of Art in Valletta where he was tutored by notable artists such as Karmenu Mangion, Chev. Emvin Cremona, Prof. Gorg Borg, Antoine Camilleri, Chev. Esprit Barthet and Fr. Marius Zerafa. In 1964 he won the Government School of Art four-year scholarship to continue his art studies in England.

He spent two years at Croydon College of Art in Surrey and specialized in painting, figure drawing and printmaking under the invaluable guidance of Michael Lewis, Barbara Brownlee and Mel Boyaner. Later he had the opportunity to be admitted in the third year of the four year licentiate diploma, a first degree course at the Accademia di Belle Arti in Rome. It was during this period when Cassar met the distinguished masters Renato Guttuso, Mino Maccari, Gentilini, Montanarini, Valente, and Argan.

During this important phase in Cassar’s artistic formation he grabbed every opportunity to develop his ingenuity in creativity, travelling extensively throughout Europe to Greece, Spain, France, Germany, Holland, England, Wales and Scotland where he visited every museum, church, and historical site. After he was successfully awarded the Diploma di Licenza and the Medaglia D’Oro in Rome in 1968, he came back to Malta to continue his art teaching career which he had started in 1962.

Impressionism highly influenced Charles Cassar’s early work. His spontaneous use of vibrant colors and love for nature responded to the environment and mythicized it. As he moved from the influence of impressionism, his forms and colors became more defined and stronger. In his writing, Professor Oliver Friggieri rightly described Cassar as “the painter of colors” (il pittore dei colori). For Cassar, color remained a fundamental tool to explore spiritual and metaphysical concepts.

In his early works, Charles Cassar studied the human body, especially the female nude and portraiture. Cassar produced many works depicting the nude form in different media and moods. For him the human body was a vessel for form, which could be externalized and perfected by a simple line.

Traditionally in Western art, the construct of the female nude is the quintessential object of the male gaze and therefore conveys the idea of vulnerability and sexuality. In contrast, Cassar’s female nudes express beauty of form, harmony, and timelessness. As the years passed his figures gradually became more mysterious and symbolic.

Experimenting continuously with figures and objects and many times synthesizing form, Cassar sometimes turned to complete abstraction. His abstract work is of a lyrical nature rather the usual abstraction which tends to be decorative or preconceived. Cassar’s abstract work conveys a spiritual outlook; it relates to that mystical sensibility. Professor Peter Mayo commented on some of the early abstract works by Charles Cassar, as the expression of “the interaction of conscious and unconscious elements within the mind.

The use of such psychedelic devices as reddish and bluish impositions depicts, according to Cassar himself one’s mental turmoil…” Cassar manipulated color unconsciously and when unconscious elements met form, the medium dictated the narration of structures of the visible. Cassar’s work developed from the realistic and naturalistic approach of effecting the transformation of the gist into a symbol of abstraction.

Charles Cassar’s major source of inspiration was what surrounds us. Anything from simple flowers, plants, birds, and fish to everything that lives. Cassar relied mostly on the natural environment as a resource for ideas. Like the famous German artist, Willi Baumeister, Cassar looked deeply into natural forms. He sought to transform organic forms into living objects.

Like an artist-shaman he transformed these objects into mythic and animistic forms which have a direct and immediate response to life. In his work Cassar emphasized the relationship of form and content and a visual exploration and expression of the spirit in and behind nature. Above all Cassar’s works reveal his beliefs, hopes and fears.

Because of their pleasing geometric shape in addition to their ideological significance, seashells became common decorative motifs. For Cassar, like other objects found in nature, seashells represents ‘time’, the spiral patterns symbolically expressing the continuation of time and the beginning of existence.

Throughout the years Charles Cassar experimented with many different mediums and themes, one of the most unique mediums being the computer. He is one of the first Maltese artists to produce art with the aid of a computer. Of Cassar’s computer generated art, the late art critic Emanuel Fiorentino said: “Cassar remains basically an artist in his relationship to his personal computer. He provides significant proof that art can or should keep in touch with scientific developments. Cassar’s example is ideally placed to stimulate others along the path of that electronic device which is in process of revolutionizing our ways of seeing and hence of aesthetic appreciation.”

While Cassar made good use of this new tool of expression he retained the techniques of more traditional methods. He used the computer to enhance his aesthetic, carefully combining computer generated imagery and traditional media.

In his selection of works entitled: “I Ricordi del Tempo” exhibited at the Pinacoteca e Museo delle Arti, Fondazione Nosside, in Locri, Italy during December 2003, Cassar presented themes inspired by Malta’s Prehistoric heritage. His works Nereidi, Sogno, and Primavera are particularly intriguing. Cassar made use of the primordial female image to illustrate the body-earth identification. These works represent the female energy which metaphorically refers to our primitive origins.

Cassar contributed to the art world both locally and abroad. Locally, he created awareness in graphic art during the late sixties, designed a set of stamps for ‘Commonwealth Day’ in Malta, and was an active member of organizations like the Malta Society of Arts, Manufactures and Commerce, Din l-Art Helwa and others.

Globally, his art exhibited widely and his works are found in galleries and private collections across England, Australia, the United States of America, Italy, and Germany. Cassar also won many awards which include the first prize in the Premio Internazionale di Incisione Cooperativa Fornaciai, at palazzo Re Enzo in Bologna; a diploma and a gold medal by the Accademia Tommasso Campanella in Rome; and full honours in the IV Biennal Internacional D’Arte Ibiza, Navarra in Barcellona.

Unique in use of color, presentation of subject, and choice of media, Cassar’s contribution to art is invaluable and he will long be remembered as an important contributor to Maltese culture.

Louis Laganà is a reader in Modern and Contemporary Art History, specializing in Jungian Aesthetics, Primitivism and other aspects of art criticism and theory. He lectures at the Junior College and the Faculty of Education at the University of Malta.

This article was originally published in The Times of Malta.  It is republished with the permission of the author.